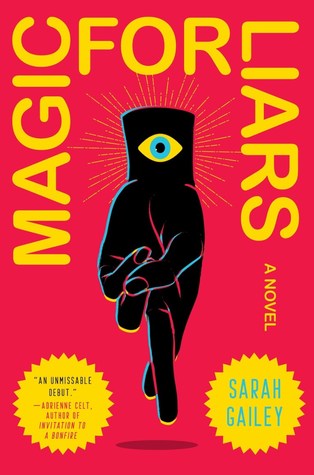 Magic for Liars isn’t what I expected it to be. I had impressions from other early readers that it would be along the lines of a murder-mystery in Hogwarts, which turned out to be less-than-accurate. Instead, Magic for Liars is about the lies we tell ourselves, and each other. It is about the disastrous things that result from these lies, no matter how well-meaning they were, or how innocent they seemed.

It begins with the gruesome death of a staff member at The Osthorne Academy for Young Mages. After an investigation by the authorities concludes the death a suicide, the heads of the Academy are unsatisfied. Enter Ivy Gamble, PI. Ivy isn’t like her sister- she isn’t magic like Tabitha and she doesn’t want to be. Though she spends most of her days following cheating spouses or investigating insurance fraud, she is reluctantly convinced (namely, by a large sum of cash) to re-investigate the death at Osthorne.

Ivy Gamble is a hot mess and an absolutely fascinating character. She is morally grey from head to toe and maybe a little bit out of her depth, but at her core intelligent and trying her best. The story unfolds entirely from her perspective as she sleuths around Osthorne, allowing herself to slip in to Tabitha’s world. There is some time given to the magic in this world as Ivy peaks into classroom and gets to know staff,  but there isn’t a deep dive into its limits and intricacies. This seemed to be a sticking point for some readers, but I never found myself bothered by it. The narrator of this story is non-magical, so it felt right that we only had topical glances at the various subjects via Ivy’s encounters with them.  Their relationships and interactions drive this plot forward without losing any of the atmospheric tension you’d hope for in a good mystery. It beckons you forward page after page and doesn’t let go until the very end. I found myself hanging on as I came approached to the conclusion thinking there was no way it was possible, skimming through previous pages making sure I hadn’t misread the the final discoveries because I couldn’t fathom how it could be. This book doesn’t give you that feeling of satisfaction that comes at the end of a typical mystery novel: the evil-doer unmasked, justice is served, our grizzled protagonist reflects with contentment on another case solved. No, the end of Magic for Liars is fucking devastating. It is devastating and brilliant.

While this book sits firmly in both the realms of mystery and fantasy, it subverts both. The evil in this book does not manifest in the form of a sadistic killer, nor is it a dragon to be slain. Ivy Gamble is not our hero, nor is this the story of her redemption. She arrives at Osthorne Academy as a deeply flawed person, and eventually departs in similar form. We don’t get to see her redemption. The choices she makes throughout her investigation are not always good, sometimes even amoral, and some of them will even make you uncomfortable. You might even see a little of yourself in their choices.

16 thoughts on “Review: Magic for Liars”