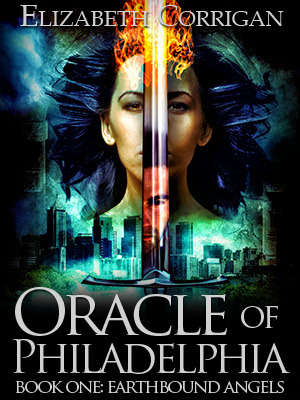 Oracle of Philadelphia is the first book in Elizabeth Corrigan’s ongoing Earthbound Angels series. In this first installment, we are introduced to the owner of an unassuming Philadelphia diner who just happens to be a centuries-old Oracle. Carrie has borne witness to power struggles between Heaven and Hell for millennia, but she is drawn back in to their conflict in an attempt to save a man who has sold his soul to protect his sister’s life.

As someone who is mostly unfamiliar with mainstream Christian lore, I was pleased with  how the intricacies of the Earthbound Angels  world were revealed without feeling burdensome. Characters and their histories are revealed as the story weaves through time, shifting between present Philadelphia and scenes in Ancient Egypt or Paris in the midst of the industrial revolution. This look at their shared histories enhances what was  one of the greatest strength of this book: the bonds between characters. In such a large cast of angels and demons each has a distinct voice, goal, and purpose within the story. They exist independently, not as mere obstacles or aides for the protagonist. This extends to one of the most notable of Carrie’s companions, the fallen angel Bedlam. The duo’s rapport lends story humor and hope when in bleak times.

Though this is the first book in the Earthbound Angels series, it also serves well as a standalone story. I tend to stay away from series because the endings are often unsatisfying, leaving too many unanswered questions or relying on the next book to wrap up loose ends. Instead, Oracle of Philadelphia strikes the perfect balance. It is satisfying as a standalone read, but leaves ample room to expand on the questions left hanging in the books that follow. Whether you’re seeking a quick, well-developed urban fantasy novel or a new series to dive in to, I highly recommend checking this out.

1 thought on “Review: Oracle of Philadelphia”